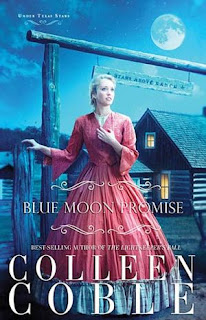 
Book Number One in the Under Texas Stars series

A love like Lucy and Nate’s only comes along once in a blue moon...
Lucy Marsh's worldly resources are running out, but she's fiercely determined to care for her younger brother and sister. When she discovers that their father's recent death was no accident, Lucy is eager to leave town. She accepts a proxy marriage she believes will provide safe refuge. But trouble follows her to Texas where her new husband is surprised to suddenly have a wife and children to care for.
Nate Stanton always hoped he'd marry someday, but running the family ranch meant he had no time for romance. When his father deposits Lucy Marsh—a city girl—on his doorstep, with two siblings in the bargain, he expects ranch life will send her running on the first train out of town. But Lucy is made of tougher stuff than Nate imagined. When danger moves in, Nate finds he'd give anything to protect Lucy and the children he's grown to love. Even if it means giving up his ranch.


My Thoughts: Lovely.  Just lovely.  From the authors note in the beginning to the final page this was a book with a message.  Ms. Coble shared in her author's note at the beginning of the book that a part of her manifested itself in Lucy.  Lucy has major control issues.  MAJOR.  But I could see why, and I could feel the weight on her shoulders almost as if it were my own.  Perhaps it's because I too rely on myself instead of given my burdens to the Lord.
I enjoyed most of the characters in this book.  Nate's brother was underdeveloped for my taste.  I would have liked more on where his emotions were coming from so I could better understand those family dynamics.  There were a few pieces of character information here and there that again, I wished were fleshed out a little better.  There were also a few times I think I audibly moaned from frustration with the actions of the characters.  That said, I learned something.  And aren't we always better when we discover something new about ourselves?
This author I think tends to do a good job, at least in the handful of books by her that I've read, of not being overly preachy as some Christian authors can be.  But this struck a good balance of faith, humor, romance and mystery.
Would I Recommend This Book?  Absolutely.  I really enjoyed this book.  My copy had some printing issues which was a little frustrating.  But I was able to get around them.  I read this book in less than a week.  Which, right now, for me is great.  There were a couple nights I stayed up later than I should have because I wanted to see what happened next.  I wanted Lucy to trust.  To trust Nate.  But more importantly to trust the Lord.  To relinquish some of that control and see where that would take her.  And in the end, it forced me to take a look at my own life.  I would rate this book 4/5 stars (it's a bookshelf, re-read someday sort of book).
There was a reader's guide at the end of the story for those who are interested in further thought, or a book club discussion.
About The Author:
Best-selling author Colleen Coble's novels have won or finaled in awards ranging from the Best Books of Indiana, ACFW Book of the Year, RWA’s RITA, the Holt Medallion, the Daphne du Maurier, National Readers' Choice, and the Booksellers Best. She has nearly 2 million books in print and writes romantic mysteries because she loves to see justice prevail. Colleen is CEO of American Christian Fiction Writers and is a member of Romance Writers of America. She lives with her husband Dave in Indiana.
For more about Colleen and her other books visit www.colleencoble.com
Click here to Buy the book.
Book Party:
Blue Moon Promise is a story of hope, romance, and suspense . . . immersing the reader in a rich historical tale set under Texas stars.

To celebrate Colleen is teaming up with her publisher Thomas Nelson for a "Blue Moon Promise" Facebook Chat party where she will giveaway a KINDLE Fire and a Texas-sized gift basket (fabulous Texas treats and fun Lucy-inspired housekeeping products)!
Invite your friends and don't miss Colleen's evening of chat, trivia, prizes, and more.
(See the button in the sidebar!)
Check out the Blue Moon Promise Blog Tour!

(I received a complimentary copy of this book for review purposes.  I am under no obligation to give a positive review.)