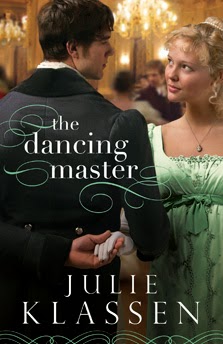 From the Publisher:
Finding himself the man of the family, London dancing master Alec Valcourt moves his mother and sister to remote Devonshire, hoping to start over. But he is stunned to learn the village matriarch has prohibited all dancing, for reasons buried deep in her past.

Alec finds an unlikely ally in the matriarch's daughter. Though he's initially wary of Julie Midwinter's reckless flirtation, he comes to realize her bold exterior disguises a vulnerable soul—and hidden sorrows of her own.
Julia is quickly attracted to the handsome dancing master—a man her mother would never approve of—but she cannot imagine why Mr. Valcourt would leave London, or why he evades questions about his past. With Alec's help, can Julia uncover old secrets and restore life to her somber village . . . and to her mother's tattered heart?
Filled with mystery and romance, The Dancing Master brings to life the intriguing profession of those who taught essential social graces for ladies and gentlemen hoping to make a "good match" in Regency England.

My Thoughts:  The idea of an entire activity or action being banned across an entire town seemed unbelievable to me.  How can one person have such influence over an entire population?  I thought about the number of times in history where changes, good or bad, are imposed on a population (hello 1920's America).  It can be done, and so I settled in for an afternoon in Regency England.

As I started reading The Dancing Master I found Julia's reckless flirtation and attitude off-putting.  It was really hard for me to like her.  While in contrast to that I found Alec's dedication and loyalty to his family charming.  I think that this characterization made the book a better story for me.  It made the characters real.  You don't like everyone in the world, some rub you the wrong way.  However in this story it was interesting to see Julia's growth through the eyes of Alec.  As he gets to know her, how does this prickly rose transform through her contact and friendship with The Dancing Master?

The reasoning behind dancing's prohibition in Beaworthy fell a little flat to me.  Perhaps as more of a frustration of it's origins that the reason itself.  The emotion behind it is real, even if the justification was hard.  (I'm being intentionally vague so I don't ruin it!  You'll have to read it for yourself.)

However, by the time I finished the book I really enjoyed it.  There are a lot of secondary characters which can get a little overwhelming, but they all tie together nicely it's hard to imagine one of the Felton brothers, the Thornes, the Allens, the Desmonds, Mrs. Tickle, or Mr. Barlow not being there.

Would I Recommend the Book?  I am not a huge fan of dancing in practice (I'm terrible!), but I am a fan of Julie Klassen's The Dancing Master.  It is a book worth checking out.

(Disclosure: I received a complimentary copy of this book in exchange for an honest review.  I am under no obligation to provide a positive review.  All thoughts and opinions expressed here are my own.)