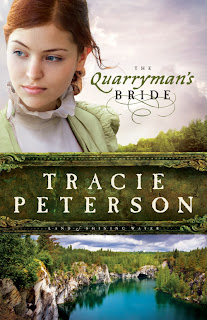 From the Publisher:
The latest book in the Land of Shining Waters series.

Emmalyne Knox and Tavin MacLachlan were destined to be together…until the tragic deaths of Emmalyne’s youngest sisters. Family tradition mandates that the youngest daughter should remain single to care for her parents in their old age, and now that daughter is Emmalyne. Her father unyielding, Emmalyne surrenders to her duty, heartbroken. Tavin leaves town, equally devastated.
Years later, Emmalyne’s family moves, and she and Tavin meet again. Their feelings for each other are as strong as ever, but their painful past and Emmalyne’s father still stand between them. Soon both families are in the midst of the growing conflict rising between the workers at the granite quarry that Tavin’s father owns and operates. When a series of near-fatal accidents occur, Tavin must figure out who is behind the attacks before someone gets killed.
Bound by obligation, yet yearning for a future together, can Emmalyne and Tavin dare to dream that God could heal a decade-long wound and change the hearts of those who would stand in the way of true love?
My Thoughts: At first, I felt the story was a little slow.  I have to admit that I skipped ahead to see what would happen (Nasty habit of mine!).  Once that was done, and I knew how it ended I couldn't WAIT to see how the story got from point A to point B.

There are pieces of Emmalyne's story that I think many can related to on some level.  Emmalyne has a strong love of family.  A desire to respect and follow traditions.  But what happens when that desire to respect and follow goes against your heart?  What happens when you are forced to give up the love of your life in order to return to a life of duty with your parents, where love from one member of your family is a ghost never seen.

A strong piece of "The Quarryman's Bride" for me surrounded the story of depression.  As someone who suffers myself, this plot point -which is often mishandled or completely left out of novels- was a welcome one.  I felt it was handled well, and was an asset to the story, rather than a distraction from it.  I would say there were even two different sides of it shown and two very different endings.

The setting in Minnesota was great (my home state!) as was the story lines relating to the Unionization happening during that time.

Can Emmalyne and Tavin's love overcome her sense of duty and obligation to traditions and the respect they both have for their parents?  Will other forces step in and separate them again?  Will Emmalyne ever become the quarryman's bride?

Would I Recommend This Book: Yes.  I would recommend this book to anyone looking for a clean Christian historical romance with a hint of mystery to it.  "The Quarryman's Bride" was a good story, with enjoyable secondary characters, good historical events/situations that are tied into the story, and a great setting.  If you are also interested in seeing how an author can weave the story of depression in, than this may be a story for you.

(I received a free copy of this eBook from the Publisher in exchange for my honest review.  I am under no obligation to provide a positive review.)

(Books are rated according to the following scale:
5 stars= A definite favorite, will be re-read again and again, and permanently placed on my bookshelf.
4 stars= A pretty good book, one that will be re-read eventually, placed on the bookshelf.
3 stars= An average to good book, that may or may not be read again, probably has a place in my library.
2 stars= A not liked book, I wouldn't read it again, and wouldn't have a place in my library.
1 star = A book I really didn't enjoy, wouldn't read again, would not keep in my library.)