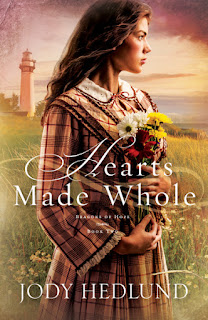 The first book in the Beacons of Hope Series, Love Unexpected featured Emma Chambers.  This second story features her brother Ryan along with Caroline Taylor.  Caroline has suffered great loss and has taken over the running of the lighthouse in her father's absence.  Becoming more confident and capable in her duties Caroline is at a loss when a man who is not up to the job is hired to be the new lightkeeper.  With lives on the line will Caroline and Ryan work together to keep the lighthouse running and sailors safe?

Would I Recommend This Book?
Yes, but it doesn't need to rush to the top of your to-read pile.  I really enjoyed the first book, this one wasn't quite as exciting for me.  (In all fairness, I tend to suffer from series syndrome and love the first book in a series and find it hard for the rest to compare.)

I enjoy the history of the series, rooted in the lighthouses along Lake Michigan.  It's interesting to learn a bit about a piece of history I really know nothing about.

I would be interested in reading more about Tessa, Caroline's sister.  Overall the characters were well written but I think it was a few small plot things that threw me off.

I liked the tying in of the driftwood, if you read the first story in the series, you will know what I mean.  You don't need to have read the first book to enjoy this story, though as always it adds to the story.


(Disclosure: I received a free copy of this book in exchange for an honest review.  I am under no obligation to provide a positive review.  All thoughts and opinions expressed here are my own.)

LEARN MORE AND PURCHASE A COPY.


My Rating Scale:
5 stars= A definite favorite, will be re-read again and again, and permanently placed on my bookshelf.
4 stars= A pretty good book, one that will be re-read eventually, placed on the bookshelf.
3 stars= An average to good book, that may or may not be read again, probably has a place in my library.
2 stars= A not liked book, I wouldn't read it again, and wouldn't have a place in my library.

1 star = A book I really didn't enjoy, wouldn't read again, would not keep in my library.)

(Bethany House, June 2015)
Can she forgive the hurting man who costs her the role she loves?
After her father’s death, Caroline Taylor has grown confident running the Windmill Point Lighthouse. But in 1865 Michigan, women aren’t supposed to have such roles, so it’s only a matter of time before the lighthouse inspector appoints a new keeper–even though Caroline has nowhere else to go and no other job available to her.
Ryan Chambers is a Civil War veteran still haunted by the horrors of battle. He’s secured the position of lighthouse keeper mostly for the isolation–the chance to hide from his past is appealing. He’s not expecting the current keeper to be a feisty and beautiful woman who’s angry with him for taking her job and for his inability to properly run the light. When his failings endanger others, he and Caroline realize he’s in no shape to run the lighthouse, but he’s unwilling to let anyone close enough to help. Caroline feels drawn to this wounded soul, but with both of them relying on that single position, can they look past their loss to a future filled with hope…and possibly love?